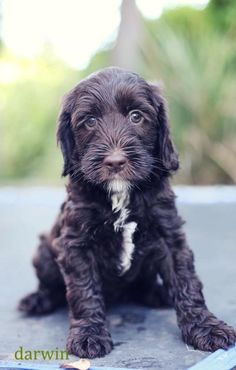 History and Types of Labradoodle 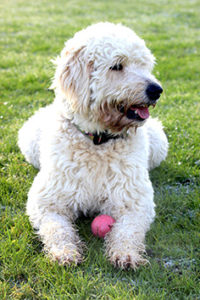 Labradoodles, also known as "Labrapoodles," first occurred in 1955, but they did not gain popularity until 1988, when the mix began to be used as a hypoallergenic guide dog.

Currently, they are not considered a breed by any major fancier and breeder organization. Not all Labradoodles are hypoallergenic. Generally, F1 Doodles—which are a 50/50 mix of Poodle and Labrador—are not hypoallergenic. However, this is greatly determined by the fullness of the dogs coat. The thicker and fuller the coat, the less likely the dog will be to shed, along with having less dander.

These increse the chances of a Labradoodle being hypoallergenic, or at least less so than a Labrador.

Labradoodles comes in three distinct versions. There is the F1—which is a 50% Poodle and a 50% Labrador. These dogs generally shed less than a Labrador, and if they have a fuller, thicker coat, they will most likely have less allergy issues than a Labrador. The second classification of Labradoodle is the F2—The F2 is are when two hybrid F1 Labradoodles are bred together. These Labradoodles are likely to not shed at all, and be 100% hypoallergenic. Lastly, there is the F3, or "multi Gen" Labradoodle. These are F2 Hynrids bred together. Caution needs to be taken when purchasing a Labraoodle for allergy purpose. You must be 100% certain that the breeder did indeed cross a purebred Labradoodle with a  purebred Labrador.

It is also important that the breeder advertises the Labradoodles the correct way as really being F1, F2, or F3 dogs. This, unfortunately, relies on the integrity and honesty of the individual breeder.

People like to refer Labradoodles as "Australian" Labradoodles. This is a fancy way of originating back to 1988 when Australian breeder Wally Conron crossed the Labrador Retriever and Standard Poodle at the Royal Guide Dogs Associations of Australia in Victoria.

Conron's aim was to combine the low shedding coat of the poodle with the gentleness and trainability of the Labrador Retriever, and to provide a guide dog suitable for people with allergies to fur and dander.

The Labradoodle is  crossbred between a Labrador Retriever and a poodle. Because of this, the puppies do not have consistently predictable characteristics. While most Labradoodles have some common traits, their appearance and behavioral characteristics remain, to some extent, unpredictable. As such, a Labradoodle's hair can be anywhere from wiry to soft, and may be straight, wavy, or curly.

Like most Labrador Retrievers and poodles, Labradoodles are generally friendly, energetic, and good with families and children. Labradoodles often display an affinity for water and strong swimming ability from their parent breeds.